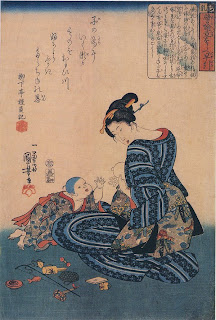 Over the past few weeks I have started expanding my study of kinbaku to include some of the more artistic influences.  One of the key areas of study has been Ukiyo-E, the art of Japanese wood block printing.  Prior to the invention and widespread use of photography in the early 20th century, Ukiyo-E was one of the primary visual media for everything from artistic expression to news and political commentary.  More than that, within the tradition of Ukiyo-E, there is a genre of work called shunga, which literally means Spring.  These prints were done by almost all of the well known Ukiyo-E artists (though often left unsigned), including the most famous of them, Hokusai.

There are two prints I have found recently (one of which is also discussed extensively in Master K's The Beauty of Kinbaku).  The first however, struck me as interesting for a completely different reason than the second.  This is a print by Kuniyoshi (Yoshitoshi's mentor, more on him in below).  This print is titled "Mother and Child with Toys" (1842).

In this print you can see a few very interesting things going on.  First, and one of the things perhaps most important to consider is that this print bears the seal of Takano Shinemon, a censor of era.  All of these prints (excluding shunga which were underground works and which also would fetch considerably higher prices) needed approval and the seal of the censor in order to be publicly displayed. 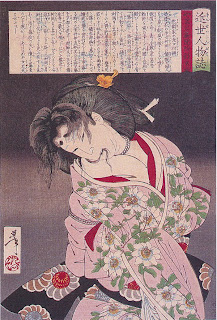 The second print of interest to me, was by Yoshitoshi published in 1887 as one in a series of "Live of Modern People." The subject of the print is Lady Muraoka of the Konoe clan.  As is obvious in the print, the woman is bound in rope, the tie around her arm and neck are both visible and she is posed in a very erotic and highly suggestive manner, implying that she is enjoying the rope and the situation.  The story behind this print is rather different, however.  "Muraoka (1786-1873) was a supporter of the loyalist faction that disagreed with the shogunate's new open-door policy. She was arrested and severely tortured in 1858 during the Ansei Purge. Her unbroken loyalty won her considerable acclaim once the shogunate fell. However, Yoshitoshi's depiction of Muraoka borders on sadomasochistic fantasy: bound with ropes she looks seductive rather than distressed, and she looks far younger than the seventy-or-more years she would have been at the time." (Shinichi Sege, Yoshitoshi: The Splendid Decadent)

I am looking forward to explore more about the world of Ukiyo-E, seme-e (torture prints) and the history of Japanese eroticism.  For all the Western notions of Japan as an open and permissive society, we can see that historically, that is a mischaracterization.  Ukiyo-E, seme-e, and shunga are all area, that were subject to and often times evaded strict codes of censorship and serious repression within both the Meiji restoration (1868-1912) and the early Showa period (1926-1945) and it was not until enactment of Article 21 of the Japanese Constitution following WWII in 1947 that there was any notion of the right of freedom of speech or of the press.